Recently I’ve been in the market for a new phone holder for my car.  I’ve managed without one for a while as I’ve just listened to Google Maps through the car bluetooth, but I’ve finally caved in and got myself a new phone holder.

I wanted something simple, inexpensive and I definitely didn’t want one of those that stick to your windscreen or dashboard.  I’ve had those in the past and they end up falling off and leaving a mark, so I’m not keen on those types.

So I decided to go with a magnetic car mount in the end.

The one I went for is the Mpow Car Phone Holder

(Amazon, #CommissionsEarned).  It’s a tiny magnetic mount that fits onto the air vent in your car.  You then place your phone onto it and is held in place by the magnet without glue, adhesives, suckers or anything like that.  Pretty simple really.

So that’s the principle, what do you get in the box?

The main piece is the actual magnetic mount.  As you can see from the picture below, it’s a magnet, that’s quite powerful by the way, and is covered in high quality black rubber on the top(which feels quite nice) and solid black plastic on the back of the magnet.  Attached to the back of the plastic are four small adjustable legs that you push into the air vent.

When I say adjustable, they’re flexible legs of rubber that bend to fit almost any kind of air vent.  I have a Ford Focus, and it fits perfectly. The mount comes with two metal plates.  Now if your phone is made of metal, you may not need these, and your phone may stick to the magnet as is.

Failing that you have two choices:

Whichever option you choose, is fine, both metal plates are ultra thin too, so there’s no worries there.

Here’s an image of the rectangular metal plate: And here’s an image of the circular metal plate that’s attached to the inside of my phone’s case: 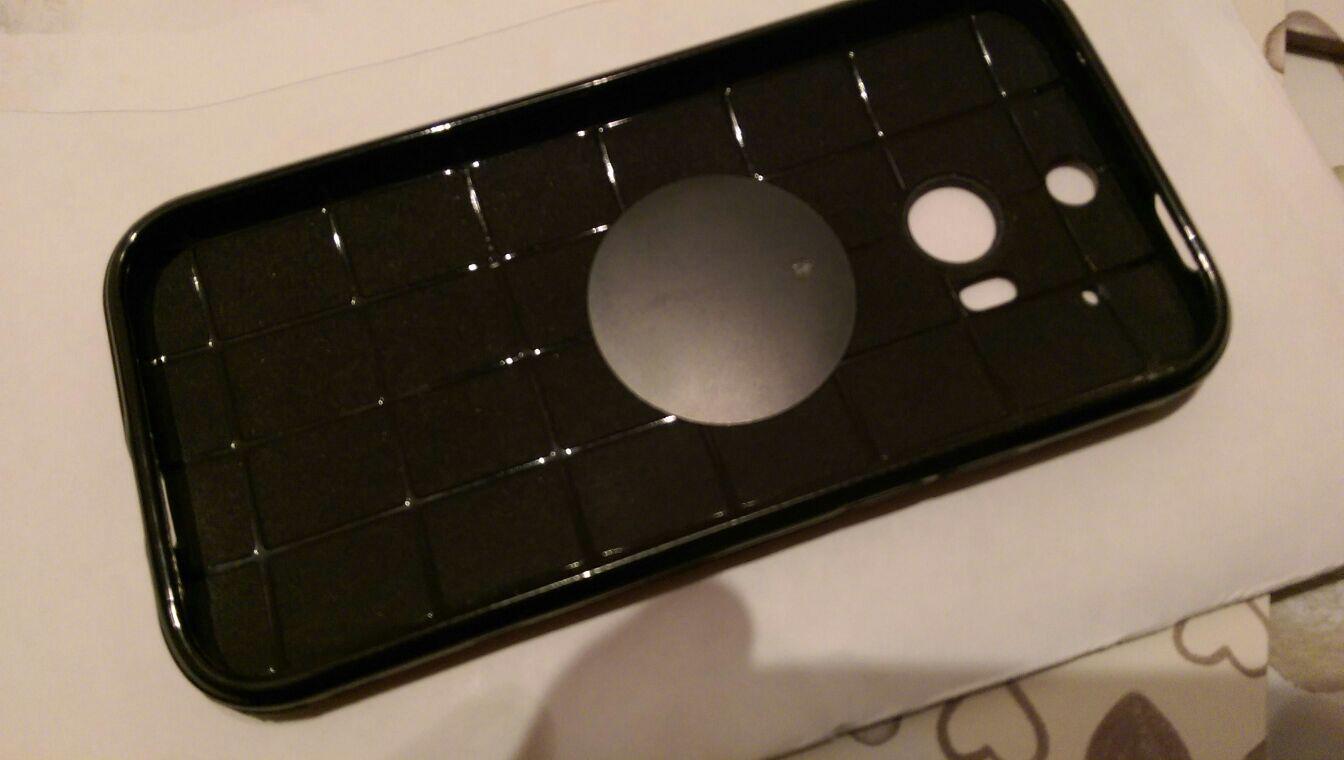 And here are some close up images: My honest opinion is that the product is very simple and just gets the job done.  I’ve had no issues attaching the magnetic mount to the air vent, and I found attaching the small circular metal plate to the back of my case to be the best option for me.

The magnet is pretty strong as I said before, so your phone won’t fall off when going over bumps.  It’s easy to remove the phone too, I just slide the phone off to release it from the magnet.

The only negative was that I was a bit confused initially in terms of the metal plates, I didn’t know which one to use, or whether I should use both, but hopefully I’ve cleared this up for you now.

Maybe one other thing is that if you’ve got a very large phone, then depending on where your vent is, your phone may become obscured slightly by the steering wheel, but if you’ve got a similar sized phone to the HTC One M8 like I have, then this won’t be a problem for you.

The title says that it is also suitable for the iPhone 7/7Plus/6s/6Plus/5S, Galaxy S5/S6/S7/S8, Google Nexus, LG, Huawei and more, so you’ll be ok if you’ve got a phone similar in size to any of these.

In terms of price, I picked up my phone holder from Amazon for £6, but you can actually get two for $8, which is a better deal than I got, so it’s worth a punt in my opinion.  Even if you decide it’s not for you, it’s won’t cost you the earth.